Training a Cat to use a Litter Tray

Training cats might sound counterintuitive to those who have never owned cats before, but actually, they are just as intelligent as dogs and are perfectly capable of learning new behaviours. Even the daftest moggie can learn to use the litter tray so there's no need to worry.

The best part about this particular training is that cats are much like humans in that they like to use a designated toilet area. Just like you wouldn't want to go in the kitchen or living room, cats also don't want to go anywhere near their food, bed or socialising areas. This means that once you have designated an appropriate area, your ambitions will be aligned and training won't be difficult at all. 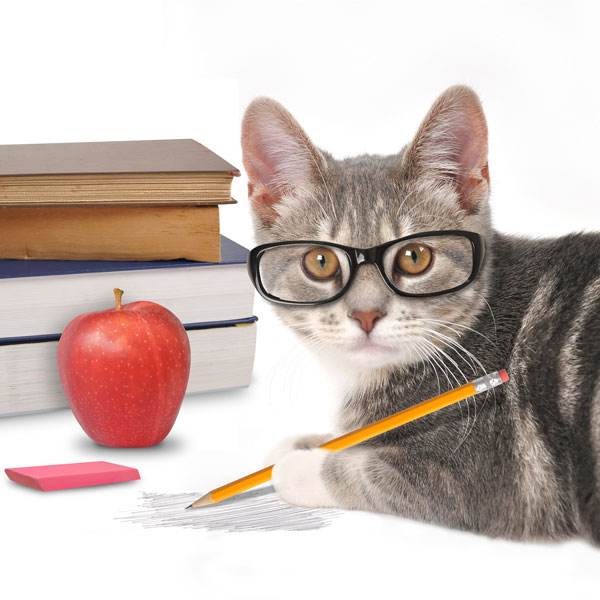 Just as we like a little privacy, cats also want a private space where they feel safe. Going to the toilet makes everyone a bit vulnerable and where we might put a lock on the door, a cat is looking for the equivalent in a quiet corner of a room that isn't used very often. Some cats also like to be protected with a partial screen hiding the litter box such as a plant. A great tip is to put tinfoil over the soil in the plant pot to make sure that the litter box is still the most appealing place to go!

Do remember that even if you are changing the litter regularly, the litter tray won't smell like roses! This should influence where you choose to put the tray as you won't want it anywhere you spend a lot of time or want to keep in peak clean condition. Think along the lines of a garage or utility room, possibly near the catflap if you have one.

You should also bear in mind that some cats - especially the older ones - don't necessarily have the best aim. The best idea is to put some newspaper down to form a perimeter around the tray. This should help catch any mishaps. If your cat is a repeat offender, you may need to reconsider the size of the box or the litter you use as this may be prohibiting your cat from going in the right place. 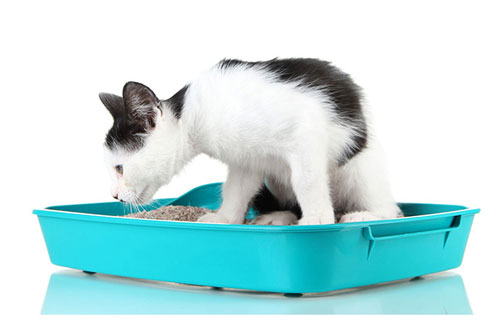 Most cats will be fine with the regular size litter trays you find in the supermarket but some larger cats may need a bigger area to be more comfortable. In fact, some fussy regular size cats might insist on this luxury too! The idea is that your cat would be able to lie down in the tray if they really want to - but hopefully, this will remain an idea and not become a reality!

Lots of litter trays now come with liners you can use to scoop up all the litter at once to put it in the bin. This is a great way to reduce the hassle and eliminates a bit of the gross factor too. You could also go for a disposable litter tray but this is often an unnecessary expense.

Some people like to choose covered litter boxes as these are slightly less offensive to the human eye. However, though cats like to feel protected, a covered box leaves them with no way of escape should they be interrupted and is, therefore, going to make them feel more vulnerable. While some cats might go for the cover, most will not be impressed.

Similarly, while a self-scooping box might be better for you, a nervous cat will just be frightened off by the electronic noises and is much more likely to choose somewhere else for their toilet time. You might want ease but your cat wants obvious safety and trying to explain the mechanics might well be too much for the both of you.

Finally, if you have an elderly cat or a cat with joint problems, you may need to reduce the height of one of the walls of the tray to allow easy access. If you are worried about the litter spilling, put a plastic sheet down under the newspaper for added protection for your floor. Old cats do often struggle with their bowels so be kind to them, praise them when they manage to make it to their litter box and try not to get frustrated if they don't get there every time.

The litter in the box is much more important than you might think. This is the cat equivalent of toilet roll so it is worth getting it right! There are all sorts of different types of litter to choose from and unfortunately, this is a case of trial and error. Some cats prefer clumping litter, others don't; some cats like grit others prefer wood pellets; some cats don't mind scented litter but others will kick up a proper fuss because they don't like the smell.

If you are training an outdoor cat to come in and use the litter tray, it might be worth adding a layer of soil if they are unhappy about using just the litter on its own. This will help encourage them to go in the litter tray by introducing a familiar aspect they already know how to use. Over time, you can gradually reduce the soil to litter ratio until you only have litter in the box.

Many cats also like to have a layer of newspaper inside the box. This acts as an absorbent material and prevents puddles appearing too. If you are not using a litter tray liner, the newspaper also makes it easier to scoop up the litter when you are ready to change it.

Introducing Your Cat to Their Litter Tray

Though cats are very clean animals, they might not have the same ideas as you when it comes to toilet training. This is why a litter tray is one of the first things you should buy - even before the cat! Your cat should be introduced to the tray as soon as possible. Many cats will immediately hide as soon as they are brought home so give them time to come out on their own first.

To introduce your cat, simply put them in the tray and praise them. Tickle their ears and maybe join them in digging around the fresh litter to show them that this is what this area is for. It is very likely that your cat will simply shrug you off and go into another room but don't be discouraged. As we have said, cats are intelligent and now they know where the litter box is, they don't fancy standing around here all day when there are clearly naps to be had. 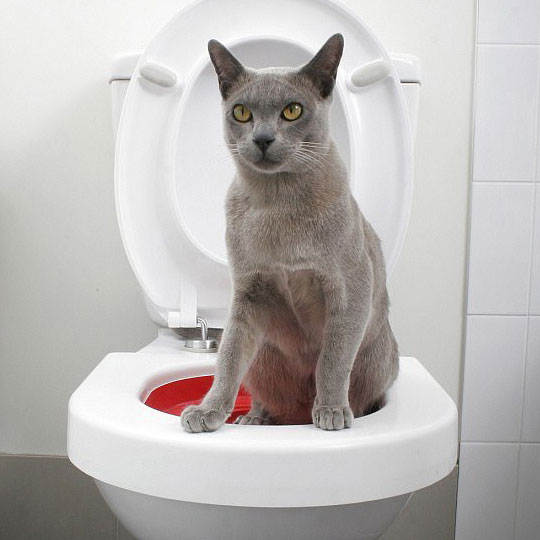 Just as toddlers need to be praised throughout toilet training, cats do too. However, don't crowd your cat while they are in the litter tray, just tickle their ears and praise them when they hop out.

Some kittens and cats might not like the litter tray experience to begin with so it is important that every time you see your cat squat in the wrong place, you rush them to the litter tray and stay with them to make sure they get it right. Then, as before, praise them with tickles and let them carry on with their day.

Though it is frustrating, don't scold your cat for going in the wrong place. If you get there as the deed is done, pick your cat up and take them to the litter tray, if not, you will just have to hope you catch them next time! Always make sure that you thoroughly clean the area to get rid of any trace of a smell. This isn't just good for you but it also means that your cat won't be encouraged to go there again because they won't find their scent markings.

If a cat keeps returning to the same undesirable location, find a way to make it less appealing. Put a pot plant on the floor or, if they are enjoying the facilities of your bed, put a plastic sheet over the top. However, do make sure that while you do this, you make the litter tray seem like a luxury ensuite by comparison to encourage positive behaviour
.

Again, cats are very similar to humans in that once they've done their business, they don't really want to see it again. This is why cats like to scratch the litter over their doings and why you should be removing clumps on a daily basis to keep the area clean. You should also change the litter once a week.

You should also make sure that the area around the tray is kept to high standards, removing any litter that escapes the tray from the floor and disposing of it. Keep an eye on your cat too. If they start scratching in the tray a lot or they revert to bad habits, they are telling you that there is a problem.

Moving From Litter Tray to Outside

Again, you might want to create an area for your cat to use if you don't want them in the veg patch. Cats like an empty bit of soil that is nicely tucked away in the garden, possibly

surrounded by shrubs on 3 sides. This gives them the protection they need from weather as well as their fear of vulnerability.

If you are still struggling to train your cat and they are not playing at all, it may be that they are stressed or ill. See your vet to find out if there are any underlying issues you need to deal with before your cat can be properly litter box trained. Elderly cats often struggle with their bowels and may need a laxative to help them along.